How many countries are in Africa? 54 in short!

There are 54 countries in Africa. Algeria is the largest country by land area; and by population, Nigeria is the largest. There are also two additional states whose independence is under dispute: Western Sahara and Somaliland. Africa has the second-largest population in the world, with an estimated 1 billion inhabitants. This constitutes almost 15% of the world’s population (2009 census). Over 1 000 official languages are spoken across the African continent; and the largest religious group is Islam, followed by Christianity. 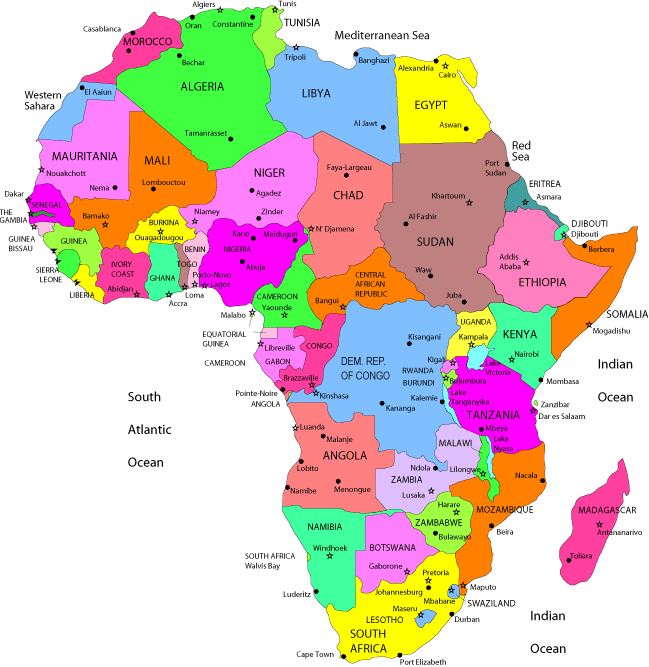 Why Western Sahara is not an African country?

Formerly the Spanish colony of Spanish Sahara, Western Sahara is a disputed territory which has been claimed by both the Kingdom of Morocco and the Popular Front for the Liberation of the Saguia el Hamra and Rio de Oro (Polisario Front). The latter is an independent movement based in Algeria.

Why Somaliland is not an African country?

Officially known as the Republic of Somaliland, it is a self-declared state and recognised internationally as an autonomous region of Somalia. The government of Somaliland regards itself as the successor state to the former British Somaliland protectorate which, after a brief independence period, united with the Trust Territory of Somaliland (formerly Italian Somaliland) to form the Somali Republic.

The disputed territory is governed by a democratically-elected government that self-proclaims its independence. However, Somaliland is not recognised by any country or international organisation as an independent country of Africa.

How big is Africa?

Africa is the second largest continent in the world in terms of land area and population. Africa covers a land mass of over 3 million square kilometres (11.7 square miles), which includes independent island states.

Africa is surrounded by the Red Sea and the Suez Canal in the northeast, the warm Indian Ocean to the southeast, the Mediterranean Sea to the north and the icy cold Atlantic Ocean to the west.

The Top 5 largest countries in Africa by land area are:

Largest and smallest countries in Africa by land area

The Top 5 smallest countries in Africa by land area are all island nations:

The smallest country in mainland Africa is the Republic of The Gambia. It is almost completely surrounded by Senegal except for its western coastline along the Atlantic Ocean.

The Top 5 poorest countries in Africa in 2019 by purchasing GDP were:

Most populated countries in Africa

Nigeria is Africa’s most populated country, followed by Ethiopia, Egypt, and the Democratic Republic of the Congo.

Seychelles is the least populated country in Africa, followed by São Tomé and Príncipe, Cape Verde, Comoros and Djibouti.

MoAfrika tours and the Kruger Safari Co. are destination management companies (DMC) and are not entities of the South African National Parks Board (SANparks).